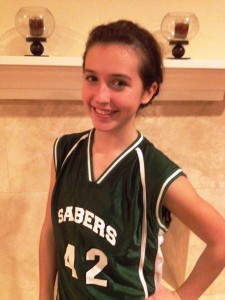 Mariana Saitas scored a spectacular and efficient 20 points with 5 steals, 2 forced jump balls and 2 rebounds.  Additionally, Mari had no turnovers.  I witnessed this game first hand and I can tell you it was the most efficient game I have seen from a young lady this season.  I had a chance to speak with Mari’s coach Chico Vasquez who commented on how he liked what an aggressive player Mari had become.

Mari is one of the more fundamentally sound players that trains with Austin Youth Basketball.  She has an uncanny ability to cause jump balls which often result in an extra 3-4 possessions per game for her team.  This proved pivotal in a close victory over arch rival St. Austin where she caused 5 jump balls in a defensive battle that ended at 18 – 16.

Next steps for Mari in her basketball training is magnifying her strength as a catch and shoot player.   We are refining her follow thru and gaining consistency.    Mari has already mastered “ready on the catch” footwork and sweeps out & drives against opponents who close out on her.

Austin high school basketball is in for a treat when Mari Saitas arrives on the scene next year.